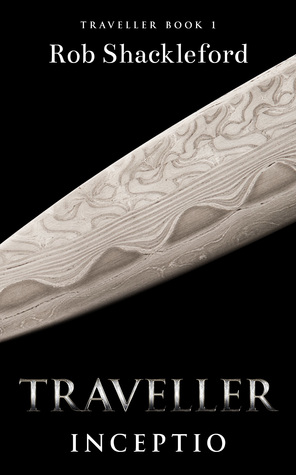 If you were sent 1000 years into the past, would you survive?

Traveller – Inceptio describes how the Transporter is accidentally invented and becomes public knowledge when it sends a subject 1000 years into the past.

A Special Forces team of Travellers is then selected and trained with the intent to send them to Saxon England to explore what could be a very dangerous period of history.

From the beaches of Australia to the forests of Saxon England, Traveller – Inceptio reveals how Travellers discover they need a lot more than technology to survive the trials of early Eleventh Century life.

Time Travel has always been an interesting concept in books. But an accidental time machine that only takes you 1000 years back is something interesting. The set-up of Traveller Inceptio in Saxon England reminded me a little of the book Outlander. But apart from the set-up and portion of time travel, the two books didn’t have much in common.

A group of university researchers accidentally build a time-machine. Sound unrealistic and absurd, but since it is fiction, let’s give it the benefit of doubt. What happens next is more relatable. Unable to keep it a secret, the existence of the time machine becomes public knowledge and trained soldiers, scientists and historians are sent 1000 years back.

What’s so special about this book?

I really liked the narration of the book with alternative chapters showing alternative point of views. It was hard to figure it out in the beginning which parts were from the past and which from present because one of the characters Michael was stuck in a forest and well, 1000 years before or now, forests exist.

The book is really fast-paced with lots of action scenes which is to be expected because, VIKINGS! The book was a mixture of science fiction and historical fiction but while the former was bit unrealistic, the latter was written to be quite believable.

What I enjoyed most:

The characters and their take on the past is something that really intrigued me and kept me glued to the book till the end. The characters were written to be three-dimensional and I enjoyed this book mainly because of the people involved in the story.

“Their little group had travelled far and been forged in adversity. In their current mood, having a second angel was of little consequence. They had learned that others could only be trusted after they had proven themselves.”

The historical references were also recognizable and one can see while reading this book that the author had done his research well.