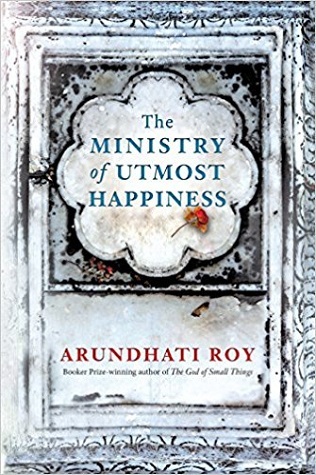 The Ministry of Utmost Happiness takes us on a journey of many years – the story spooling outwards from the cramped neighbourhoods of Old Delhi into the burgeoning new metropolis and beyond, to the Valley of Kashmir and the forests of Central India, where war is peace and peace is war, and where, from time to time, ‘normalcy’ is declared.
Anjum, who used to be Aftab, unrolls a threadbare carpet in a city graveyard that she calls home. A baby appears quite suddenly on a pavement, a little after midnight, in a crib of litter. The enigmatic S. Tilottama is as much of a presence as she is an absence in the lives of the three men who love her.
The Ministry of Utmost Happiness is at once an aching love story and a decisive remonstration. It is told in a whisper, in a shout, through tears and sometimes with a laugh. Its heroes are people who have been broken by the world they live in and then rescued, mended by love – and by hope. For this reason, they are as steely as they are fragile, and they never surrender. This ravishing, magnificent book reinvents what a novel can do and can be. And it demonstrates on every page the miracle of Arundhati Roy’s storytelling gifts.

At magic hour, when the sun has gone but the light has not, armies of flying foxes unhinge themselves from the Banyan trees in the old graveyard and drift across the city like smoke. When the bats leave, the crows come home.
Not all the din of their homecoming fills the silence left by the sparrows that have gone missing, and the old white-backed vultures, custodians of the dead for more than a hundred
million years, that have been wiped out. The vultures died of diclofenac poisoning. Diclofenac, cow-aspirin, given to cattle
as a muscle relaxant, to ease pain and increase the production of milk, works – worked – like nerve gas on white-backed vultures. Each chemically relaxed, milk-producing cow or
buffalo that died became poisoned vulture-bait. As cattle turned into better dairy machines, as the city ate more ice cream, butterscotch-crunch, nutty-buddy and chocolatechip, as it drank more mango milkshake, vultures’ necks
began to droop as though they were tired and simply couldn’t stay awake. Silver beards of saliva dripped from their beaks, and one by one they tumbled off their branches, dead.
Not many noticed the passing of the friendly old birds. There was so much else to look forward to.”

And with that prologue, I was sold. Such profound and strong message about how capitalism was destroying things, covering up everything in a few words. The imagery of vultures dying, cows being drugged to get milked and abundance of ice cream creates such a picture in one’s heads like a thousand word essay of Karl Marx can’t.
Roy began the story with creating the characterisation and showing the life of Anjum, a transgender. The first few hundred pages flew by like nothing; I was so engaged in the intricacies of change her life was experiencing, how the world was changing around her in a complete parallel with how she was changing.
And then came a long reading slump, following which I just couldn’t pick up the book again for months. Even when I tried, I found the prose to be completely dry and so boring, I had to shut the book again not to be picked up until the next time I was enticed by Anjum’s character and thus, returned to the book.
Once the Kashmir premise had already been established, then I got fond of Roy’s writing again.

If I look at the book from a journalistic mindset, it was a completely biased and fiction to the extreme but as a reader, I understood how Roy plays with her reader’s heartstrings by rendering them vulnerable to the words.

She wrote about the rage and the madness that existed in the minds of Kashmiris each of whom had lost someone- their neighbour, their father, their child, their wife; justified or unjustified, it leaves a stain, a mark of hatred that even vengeance can’t dampen but it is the only thing left to try.
It was like the student who got into engineering despite knowing he didn’t want to pursue it and that there was going to be no future in it once it was done. But it has already been five years of struggle, failing, pressure and stress so it’s either you finish it and get depressed and die or you kill yourself. There was no victory on either side, so what could stop one from self-destruction?

“Life went on. Death went on. The war went on.”