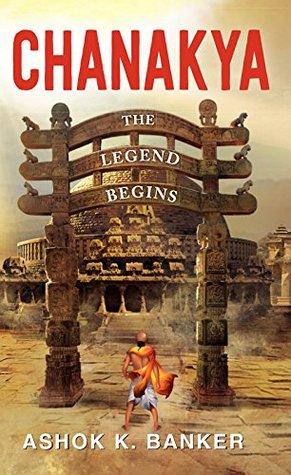 Jurist, war strategist, kingmaker. Master administrator. Author of the Arthashastra. But before the legend, there was the boy: Vishnu Gupta. Pataliputra, capital of the great Nanda empire, is teeming with crime and corruption. Granted unlimited authority by the hedonistic emperor Mahapadma Nanda, evil mastermind Maha-amatya Kartikeya has the city in a vice-like grip. But another name bubbles up through the chaos; there is talk of a young genius, Vishnu Gupta. When the Maha-amatya investigates the rumours, he recognises a future rival in the boy. He is determined to destroy this competition from the roots – family and all. Vishnu must gather all his wits and his formidable knowledge to protect everything he holds dear. The holy scriptures, his brilliant interpretations of the Vedas and the power of his unmatched mind: these are the only tools he has against the might of the most powerful man in the empire.

The only reason I am not giving this book 5 stars is that it ended too early. Just as Vishnu’s character began to grow and show its potential, the book ended with his first feat without even showing the consequences of it. It was a really short book and I finished it in one sitting, just read it cover to cover but that is also because it was so interesting.
Beginning as a clever description of the little Brahmin who was the odd one out among his peers and not just for being a genius but also his quirky appearance which he used to his advantage, hooked me in.
The overall build-up of the premise, starting from Vishnu’s home and the environment there and then moving to the empire of Patliputra and the social and economic setup there was quite interesting to read about. I already like reading Historical Fiction and it is even more fun when it is Indian history. Moreover, Chanakya is the kind of person who invokes a lot of curiosity in everyone’s mind. I had barely gotten my hands on the book when two people already asked to borrow it once I was done with it. The reason is simple. Everyone wishes to know more about such a genius man. But what I really adored about this book is how his character is shown to be quite precocious in childhood and yet he has that childish feel to him. Despite being quite smart for his age, he is stubborn and even after possessing a lot of knowledge, which would make an adult humble, he prefers showing-off.
Yet the righteousness that he held in his character even at the age of seven was extraordinary. The way the author made sure that the reader got just as interested in characters other than Vishnu was all made possible through his incredible writing style which was not only simple and easy to read but also stimulating. The only complaint I have is that instead of just making this as the first installment, the author should have added more to the story and made it into one big book (I guess that is more up to the publishers) but that would have left me feeling more satisfied and feeling better about reading the book than I do now.