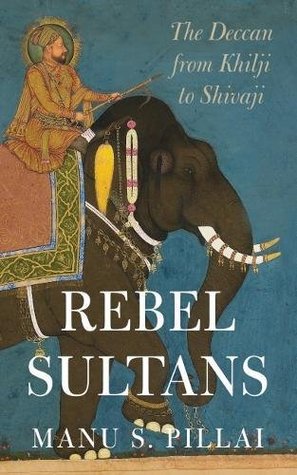 Because I am not much into history but this book was good. I haven’t read Manu S Pillai’s The Ivory Throne and read this book because I basically have little to no knowledge about history. So when I started reading the book, I had expected it to be boring text that just went on and on but instead, I got stories of individual characters told in a good narrative.

I am sure I would have enjoyed it more if I had already known a little background about them, but what I did read astonished me. There were some clever kings, some fools and some kickass crazy ones.

It talks about Deccan’s History but not as a collective whole but broken down and shown like a story in parts. I really enjoyed some of the stories like ‘Kiss my Foot’ and certain elements like the king who put a Quran next to his throne so the Muslims could bow without abandoning their customs. That just added such a human touch to the story. Because usually when we read about history, it is presented in an emotionless way. Even the blood of thousands, pillage, ransack, slavery, everything is written in a way to just present facts and not evoke any emotions.

But the author doesn’t do that with this book. The King who knowingly that his death would ruin the kingdom, still gave the reigns of it to a twelve-year-old boy, showed me such a humane facet of history that I might forget the names but I’ll carry those stories with me.

Moreover, the illustrations and paintings just made the book more interesting as it broke the monotony of the text. The book in itself is simplified for more easy understanding and even a history novice like me could understand what the hell was going on. But I was also flipping the pages every once in a while to read the notes for a deeper insight, or just to look at the pictures again. It is easy to get bored after a couple of pages with a book like this, but if you keep going with it, in the end, it is just worth dragging yourself to flip that next page. One thing is clear and that is that the author has really done his research with this book.

If you already enjoy reading history books, this will be a gem in your collection and if you are like me, and aren’t much into it, you can still read and understand it for a better understanding of the history of Deccan.

I personally would not have picked this book, but now after I have read it, I am wondering if I should read the Ivory Throne as well.

One thought on “Rebel Sultans by Manu S Pillai”