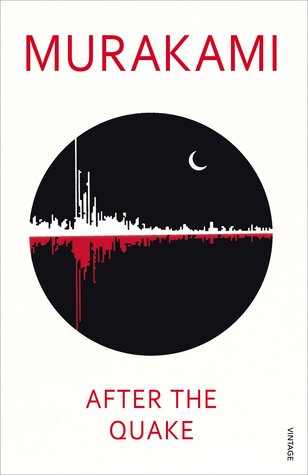 The six stories in Haruki Murakami’s mesmerizing collection are set at the time of the catastrophic 1995 Kobe earthquake, when Japan became brutally aware of the fragility of its daily existence. But the upheavals that afflict Murakami’s characters are even deeper and more mysterious, emanating from a place where the human meets the inhuman.
An electronics salesman who has been abruptly deserted by his wife agrees to deliver an enigmatic package—and is rewarded with a glimpse of his true nature. A man who has been raised to view himself as the son of God pursues a stranger who may or may not be his human father. A mild-mannered collection agent receives a visit from a giant talking frog who enlists his help in saving Tokyo from destruction. As haunting as dreams, as potent as oracles, the stories in After the Quake are further proof that Murakami is one of the most visionary writers at work today.

Six different stories with unique characters that take place around the central theme of the earthquake that took down most of the Kobe city.
I am enticed by Murakami’s world. I wonder how is able to keep up the quality of his writing while giving us so many stories.
The book started by quoting Dostoyevsky which in itself made me sure that this would be another great read. My two favourite stories have to be ‘Landscape with flatIron’ and “Honey pie’.
While one made me so sure of the hopelessness of human existence, the other made me believe that some things are worth all the pain and misery one brings with his existence.
See, this is what I love. This wasn’t just 6 disconnected stories about different characters. It all had that basic underlying theme that

No matter how far you travel, you can never get away from yourself.

I thought if I kept reading enough Murakami, I’ll start to feel a decline in his charm and this obsession I have going on with this author would fade away but the opposite is happening. the more I read his work, the more I ONLY want to read his work.
The first story brings us the story of Komura who is as empty as a chunk of air. I felt him to be the second most relatable character. The first one being Junko who also believes she is completely empty. Coincidence? I think not. But that second story left me startled at first and in deep thought after I finished reading it. I just stared at a blank wall contemplating life after reading it.

“But there’s such a thing as a way of living that’s guided by the way a person’s going to die.”

The other stories were just as good but sometimes there’s a phrase or a sentence or a situation that you can really connect with and for me that story was Landscape with Flatiron.
Honeypie was by far the most heart touching story I read with the most beautiful writing. It was raw and real and truly memorable.
Some other things that I love about this book:

“He would eventually have to pass through the forest, but he felt no fear. Of course – the forest was inside him, he knew, and it made him who he was.”

There is this aspect of Murakami’s writing when he writes about internal struggle so effortlessly in such a way that any person can comprehend.

“And besides, thought Yoshida, If it was all right for God to test man, why was it wrong for man to test God?”

And then there are these questions that reverberate so true in your core.

“I may have nothing inside me, but what would something be?”

In the end, this book will also be added to my favourites shelf because I adore it.